The History of Mount Olivet

Mid 1800s
In the mid 1800’s, Methodist preaching in Arlington began in the area known as Walkersville near the north intersection of Glebe Road and Dittmar Road. Homes in the area were used for services. The Methodist Protestant Church separated from the Methodist Episcopal Church in 1830. Its ministers were young, vigorous, evangelistic and looking for opportunities to establish new churches.
1853
In 1853, the Maryland Annual Conference assigned Dr. E. J. Drinkhouse to the Potomac Charge. Associated with him was Oliver Cox, who was assigned as the sole pastor of the Circuit in 1854. It was the vision and energy of these two ministers along with that of George Wunder, a dedicated layman, that lent encouragement to the group of farm folks and tradesmen meeting around the future Mount Olivet location.
March 12, 1855
On March 12, 1855, John B. Brown and his wife Cornelia deeded approximately nine-tenths of an acre of disputed property in Alexandria County, now known as Arlington County, to seven individuals in Trust for a Methodist Protestant meetinghouse and burial ground.
March 30, 1855
On March 30, 1855, William Marcey and his wife Ann deeded the same piece of property to the same individuals in Trust for the same purpose. The location was the southwest corner of Glebe Road and Brown’s Bend Road (16th Street North.) Thus a disputed parcel of land became the focus of attention as a location for Mount Olivet United Methodist Church, the oldest church site in continuous use in Arlington County.
April 26, 1855
The cemetery is the final resting place of Sue Landon Vaughan who was instrumental in creating a special Memorial Day for veterans of all our wars. She began the custom of decorating the graves of Civil War soldiers, Yankees and Rebels, while living in Jackson, Mississippi. On April 26, 1865, she and other ladies were decorating graves of Confederate soldiers when Mrs. Vaughan decorated the graves of four Union dead. A friend heard of that deed and suggested to General John Alexander Logan, Commanding Officer of the Grand Army of the Republic a patriotic organization composed of Union veterans of the American Civil War that the practice be established nationwide.
Naming the church
There is no documented record on the naming of the church, but tradition says that Oliver Cox selected the name Mount Olivet. Undoubtedly, this came from the biblical text in Matthew 28 verses 16 – 20 describing the location where Jesus spoke to the eleven disciples. It was on Mount Olivet that he proclaimed the Great Commission to make disciples of all nations, baptizing them in the name of the Father, and of the Son, and of the Holy Spirit.
The Civil War
During the Civil War, without a place of worship, membership and church activity faltered. For several years, no minister was assigned to the Charge and to an outside observer; it would appear that the church had been abandoned. But the tiny congregation hung on without funds and lacking much in the way of material possessions. By 1870, along with the parsonage, a small meetinghouse was constructed.
1870 - 1900
Between 1870 and 1900, in addition to Walker Chapel and Cherrydale, Mount Olivet mothered the churches of Gum Springs, Bailey’s Cross Roads, Beulah and a new work at Lewinsville. Cherrydale and Walker Chapel have survived these passing years, but the fate of the others is unknown.
1894
In 1894 the Reverend Jesse W. Norris was assigned to Mount Olivet and notwithstanding that this was a period of economic depression, he immediately took steps towards the construction of a new church.
1920
In 1920, an education wing was added to the south side of the church. The bell tower was relocated along with the vestibule and stucco was placed on the entire outside. In April 1921 it was reported that the construction was complete – all for $15,000. 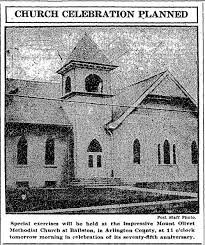 1954 - 1962
Plans in 1954 called for a chapel, church offices and classrooms in a two-story addition along with a basement addition on the space occupied by the old frame and stucco 1870 church. Additional construction in 1962 expanded the sanctuary into the cemetery and added a two story south wing primarily to create additional classrooms. A new fellowship hall was included along with a kitchen. The old fellowship hall was converted into classrooms. At this time, church membership approached 2,800 and Sunday School attendance neared 500 with classes being held during both worship services. 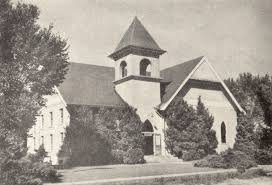 Read a short report by Jim Dake on the history of Mount Olivet and racism within Arlington and the United Methodist Church.

Thank you! Your submission has been received!
Oops! Something went wrong while submitting the form.

Subscribe to the eNews to receive announcements and more every Thursday.